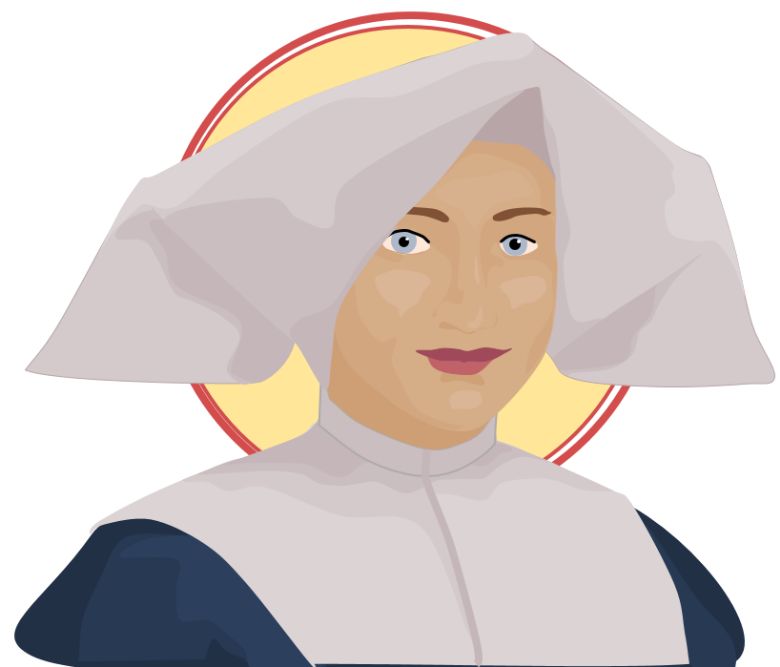 "One must see God in everyone."

Who Was St. Catherine?

After having a dream about St. Vincent de Paul, at a young age, Louise joined the Daughters of Charity founded by him. Soon into her ministry, Catherine saw a lady seated in the sanctuary, Mary, the mother of Jesus. She approached her and was instructed how she was to act during times of trial, pointing to the altar for consolation. The lady showed St. Catherine the Medal of the Immaculate Conception, now known as the “Miraculous Medal” She gave Catherine the mission of having the medal made and to spread devotion to it.

The miraculous medal which Mary showed to Catherine was oval showing Mary standing on a globe crushing the head of the serpent (the devil). Mary’s hands were showering a cascade of brilliant rays upon the world.

On the reverse side of the medal was a cross, intertwined with the letter “M”.

The “M” stands for both Mary and for Mother and was to be surrounded by twelve stars. The two hearts are the Sacred Heart of Jesus encircled by a crown of thorns and the Immaculate of Mary, pierce by a sword. The Flames symbolize the burning love of Jesus and Mother Mary.

Mary told Catherine, “All who wear them will receive great graces.”

St. Catherine served humbly, not wishing to be known as a visionary.  It was only after 46 years of service that she informed her Sister Superior that she was the Sister that Mary had appeared to.  At Catherine’s death, on December 31, 1876, at the age of 70, few people knew of her visions. She preferred a silent life, spending her time caring for the aged and sick.

She is a wonderful example of humility and service, putting the needs of others before her own image – a great intercessor and example for our House.

Lord, I am here.  Tell me what you would have me do.

If He gives me some task I am content and I thank Him.

If he gives me nothing, I still thank Him

Since I do not deserve to receive anything more than that,

and then I tell God everything that is in my heart.

I tell him about my pains and my joys, and then I listen.

If you listen, God will also speak to you.

For with the good Lord, you have to both speak and listen.

God always speaks to you when you approach him plainly and simply.